La Bedina is an old ancient house made with sandstone and with a stony roof covered with piagne, sandstone sheets, laid on a plank surface. In front of the house is the beatiful aia, a large space paved with it original flagstones, and a well. The upper level was the old living area of the house, the lower floor originally consisted of three cellars, two of which were once used as stables, the third being a wine cellar. The part of the house available to guests is the upper level which consists of four rooms: the kitchen, the bedroom, the large living room and the bathroom, a total area of around 60 square meters. The entrance to the house is via the kitchen which was once the old gradile, the local name for a chestnut drying room.he kitchen now is a small but lovely and well organized room. The cooking area consists of the cooking plate hosted in a chestnut BANCONE which has shelves for pots and food and where the electric oven finds its place. The washing sink is a two-vasche ceramic sink that was found in an old "bottegha" (old shop of an artigiano) of Florence of an old plumber with the passion of collection old materials. In the kitchen there is also the dining table, but you have the options of having your meals in the spacious living room or in the terrace where you can enjoy also the beautiful view, the songs of birds and the sound of the Magra River. The kitchen is well equipped. When we bought the house, the bedroom was full of cages for rabbits and other domestic animals and it was used as a chicken coop. Today this room has two walls of exposed stonework, a wall of canniccio, and a vaulted ceiling. Both the wall of canniccio and the vaulted ceiling are constructed in the traditional manner which consists of a frame of chestnut wood supporting woven sticks of hazel covered in plaster. The living room is a large environment divided into two areas: the living area with a dining table and its original corner cupboard, and the sleeping area with a sofa bed and large high backed bench. The centrally placed wood burning stove heats the room during the cold months, whilst the two windows and French doors which face south fill the room with light. This room has all four walls in exposed stonework and in one of the two niches you can still see the old clay urn in which money and precious objects would have been hidden. This niche would have been covered with a stone slab and plastered over so that it wasn’t visible, in other words this was the ancient version of the modern wall safe. The living room is a spacious and sunny room where you can enjoy you meals, or you can relax reading a book, listening to a nice cd, or watching a good movie. Available to guests are a collection of Italian and English books, cd, satellite TV and radio, the stereo and the DVD reader. The window doors in the living room lead out onto the terrazza, a large balcony paved with sandstone slabs, from which you have a wonderful view of the valley below and of the village of Casalina. In the terrace you can find a dining table and umbrellas and it is a perfect place to have you breakfast or your dinners with grilled meat or fished prepared with the barbecue available in the portico, which can be used also to cook bread, pizzas and cakes. Steps lead down from the terrazza to the arches below with their imposing stone pillars, to the old stables and cantina, and to the vineyard. The vineyard, which is presently being restored, is around 1000 square meters in size and produces a large quantity of good wine. On the land below the vineyard an organic vegetable garden is being created. From the living room you pass through into the bathroom which was once used as a storage area for food like flour or potatoes. We found a couple of large wooden chests here which had been used for that purpose. The bathroom is characterised by exposed stonework walls, a ceiling of chestnut beams and planks, a built in shower, and the original chestnut doors which we have restored. The large stone doorposts and lintel between the bathroom and the living room show that this was originally a main entrance to the house and that what is now the bathroom was once a large porch that at some point was enclosed with walls to create a room. 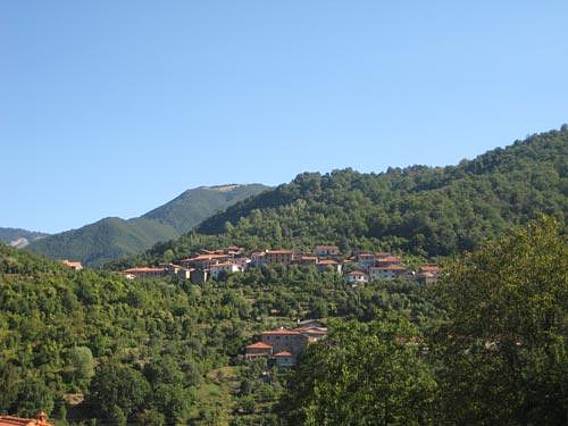 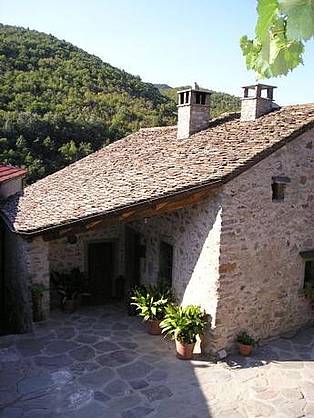 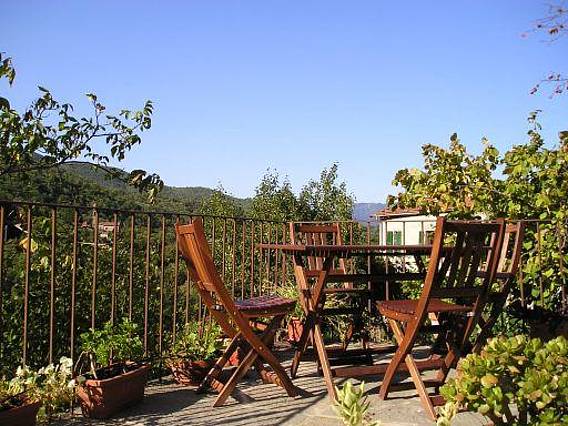 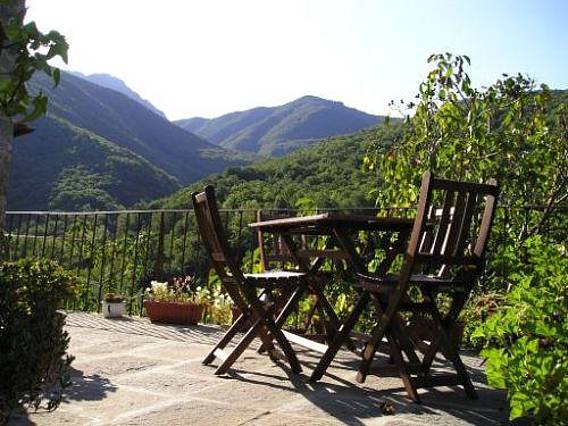 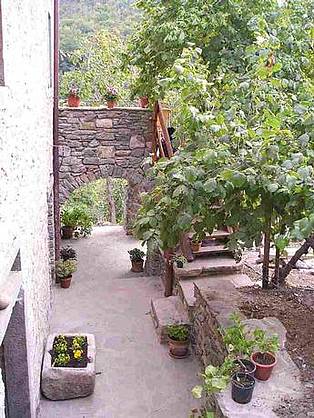 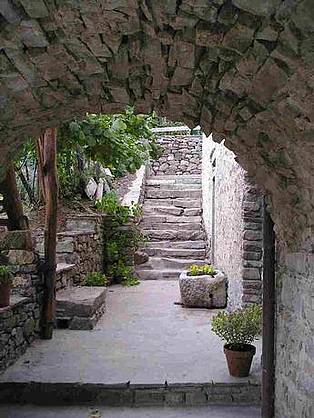 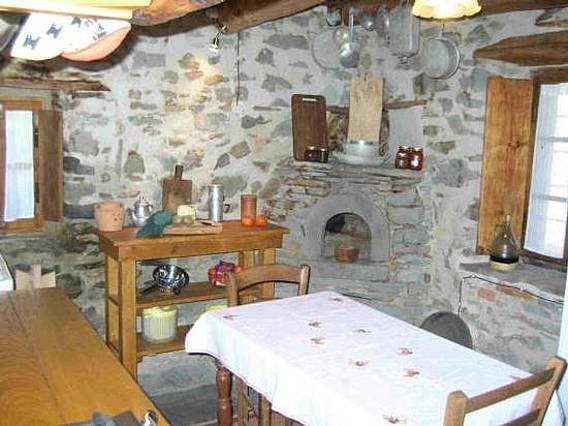 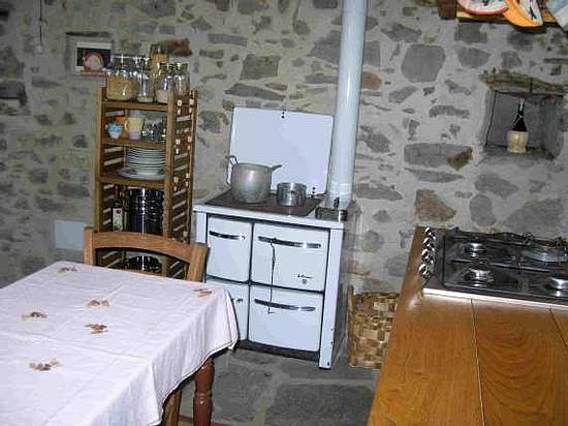 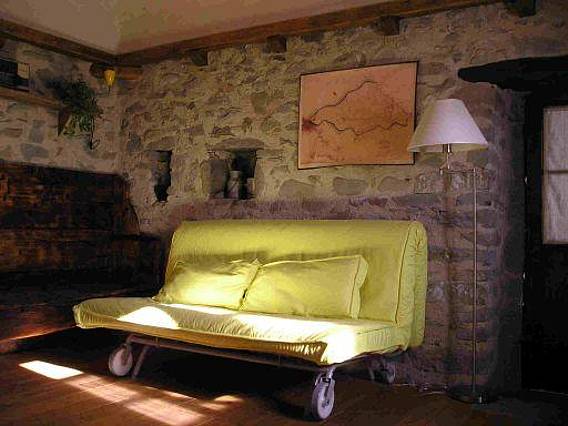 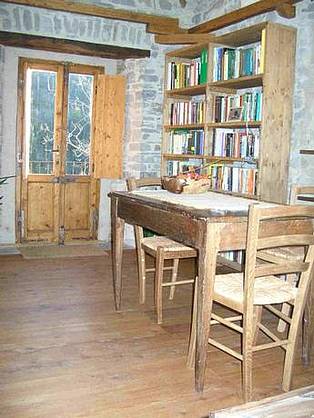 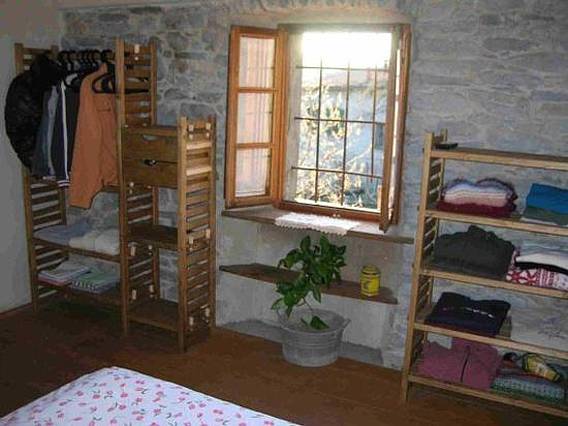 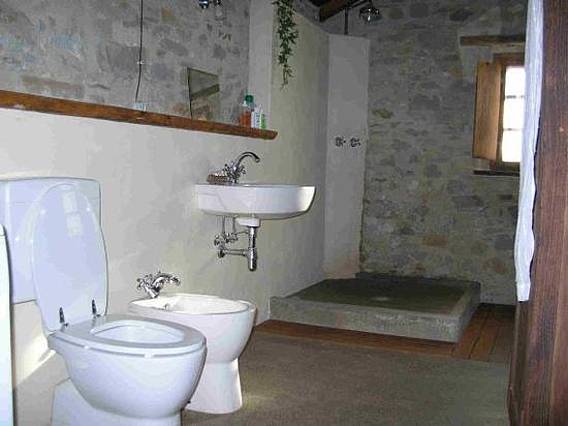 La Bedina is set in the green landscapes of the Apennine Mountains. The village of Groppodalosio, where la Bedina is, is ca 520m above see level and it is on the Via Francigena, the pilgrimage way which in the medieval times leaded from Canterbury to Roma. The village is famous for its medieval bridge on the Magra River. The surroundings offer either peaceful easy walks along the natural tracks connecting Groppodalosio with the other villages, or hiking excursion for hiking lovers. This is the most northern part of Tuscany, named Lunigiana outlined by the Apennine, the Apuan Alps and the Tyrrhenian Sea. La Bedina is perfect for a relaxing holiday in this special area of Tuscany, or for visiting the classic touristic cities of Pisa, Lucca, Siena e Firenze. Also, some of the most famous costal area of Italy like Versilia and Cinque Terre are easy to reach.